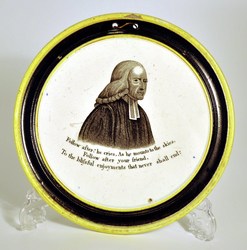 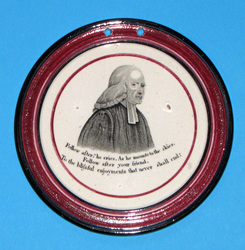 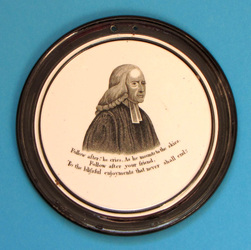 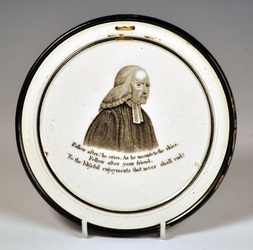 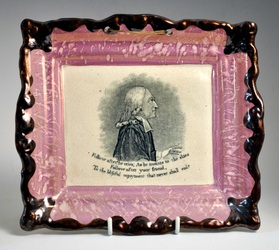 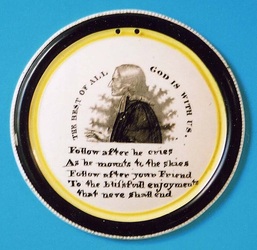 Portratits of John Wesley, with a Charles Wesley verse beneath, as follows:

Follow after: he cries, As he mounts to the skies,
Follow after your friend,
To the blissful enjoyments that never shall end. 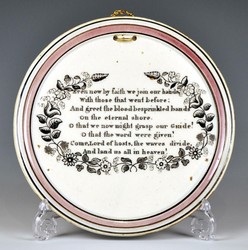 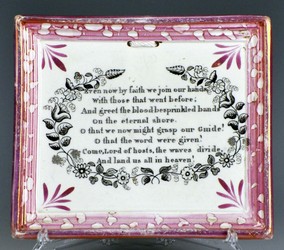 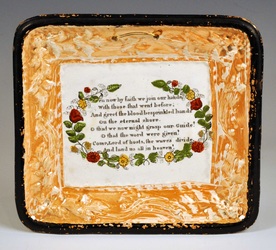 Even now by faith we join our hands,
With those that went before;
And greet the blood-besprinkled hands
On the eternal shore.
O that we now might grasp our Guide!
O that the word were given!
Come, Lord of hosts, the waves divide,
And land us all in heaven!

From the hymn 'Let Us Join Our Friends Above' (1759) by John Wesley's brother Charles (1707–1788).  See link below for the full version.  The extract above comes from verses 3 and 4. The plaques above are attributed to Scott's.

The exceptionally large and rare plaque form below (10.5 x 7.25 inches), incorporating a transfer of John Wesley and the Charles Wesley verse, is attributed to Ball's Deptford Pottery. The final plaque (below right) has a Tyneside variation of this transfer, which I've attributed to John Carr & Sons. 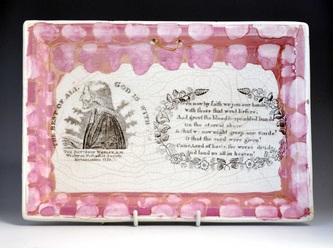 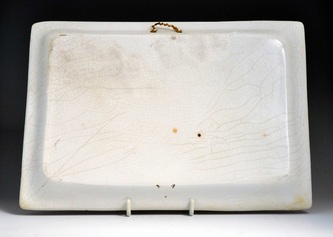 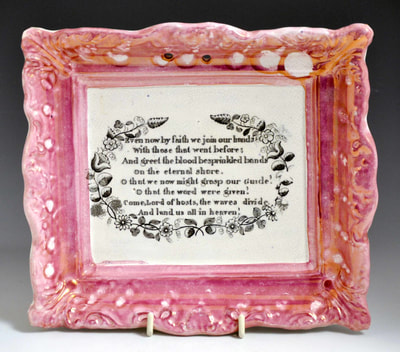 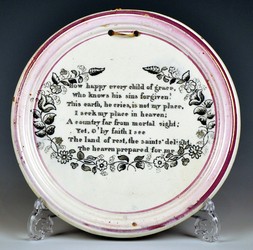 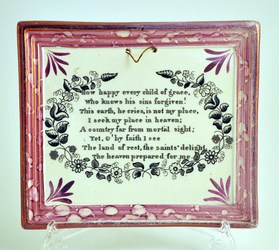 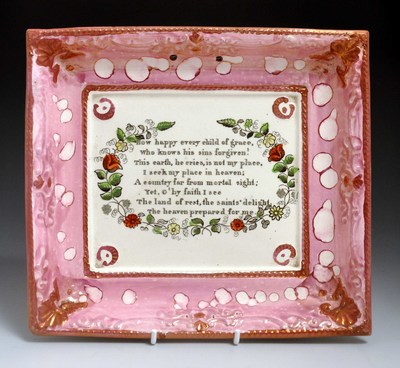 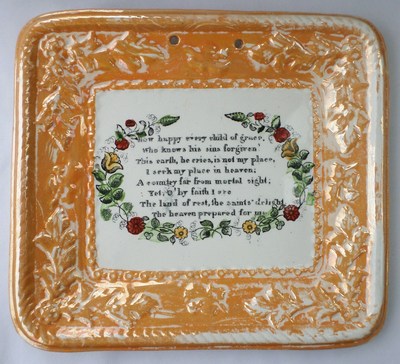 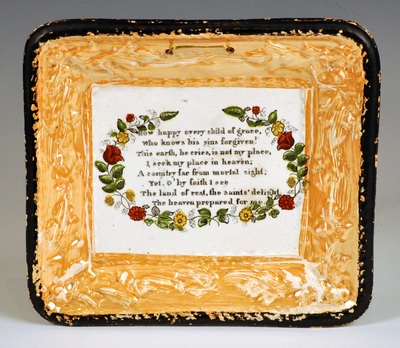 How happy every child of grace,
Who knows his sins forgiven!
This earth, he cries, is not my place,
I seek my place in heaven;
A country far from mortal sight;
Yet, O' by faith I see
The land of rest, the saints' delight,
The heven prepared for me.

From the hymn 'How Happy Every Child of Grace' (1759) also by Charles Wesley.  See link below for the full version. The extract above is verse 1. The plaques above are attributed to Scott's. 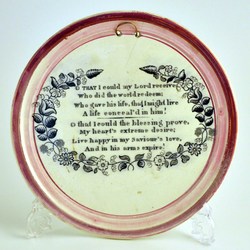 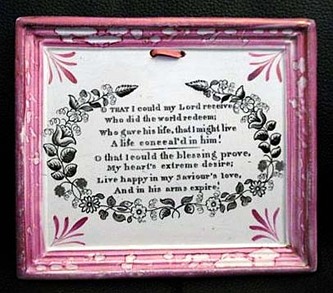 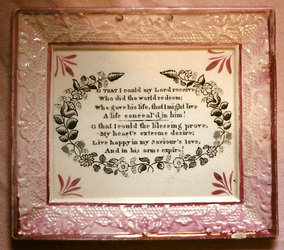 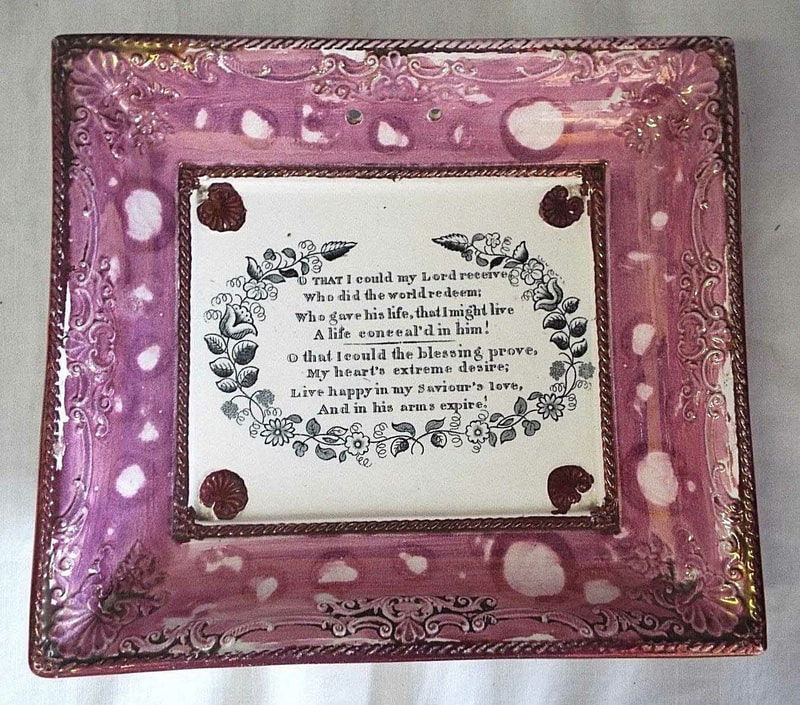 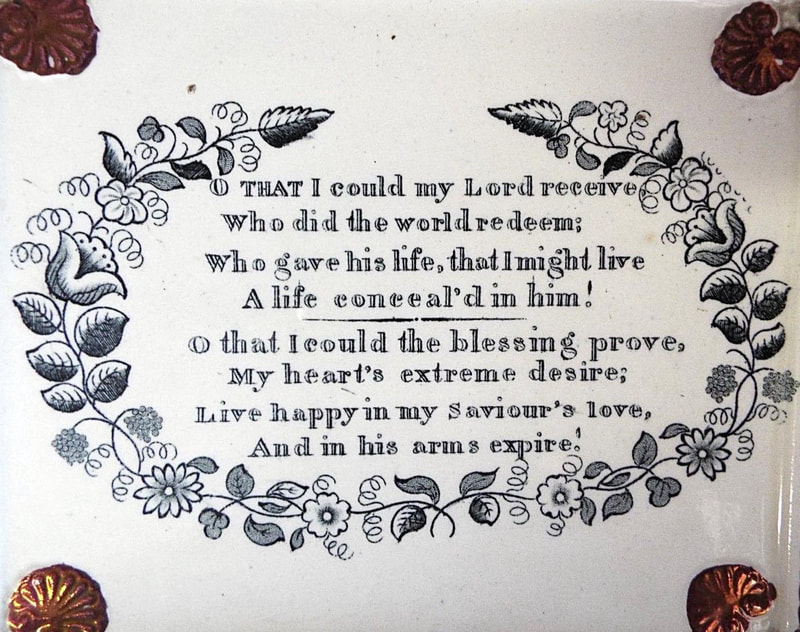 O THAT I could my Lord receive
Who did the world redeem;
Who gave his life, that I might live
A life conceal'd in him!

O that I could the blessing prove,
My heart's extreme desire;
Live happy in my Saviour's love,
And in his arms expire!

The verses above, also written by Charles Wesley, appear as verses 1 & 2 of hymn 125 in The Methodist Hymnal (1889 edition).  See the other verses on the link below. The plaques above are attributed to Scott's. 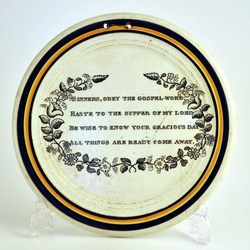 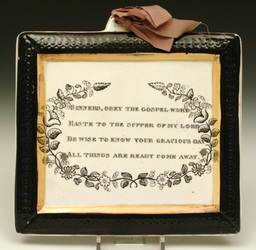 SINNERS, OBEY THE GOSPEL-WORD:
HASTE TO THE SUPPER OF MY LORD
BE WISE TO KNOW YOUR GRACIOUS DAY
ALL THINGS ARE READY COME AWAY.

Verse one from the hymn by Charles Wesley, 'Sinners, Obey the Gospel Word'.  From 'Hymns and Sacred Poems' (1749). These plaques are attributed to the Sheriff Hill Pottery, Gateshead. 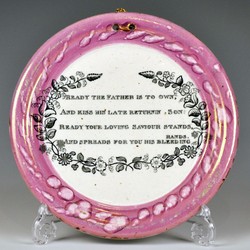 READY THE FATHER IS TO OWN,
AND KISS HIS LATE RETURNIN SON:
READY YOUR LOVING SAVIOUR STANDS,
AND SPREADS FOR YOU HIS BLEEDING HANDS.

Verse two from the hymn by Charles Wesley, 'Sinners, Obey the Gospel Word'.  From 'Hymns and Sacred Poems' (1749). The plaque is again attributed to Sheriff Hill. 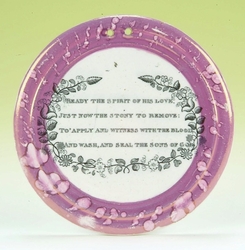 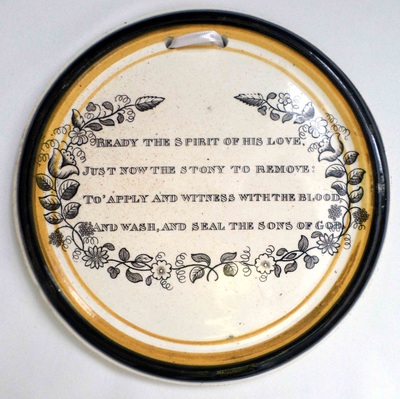 READY THE SPIRIT OF HIS LOVE,
JUST NOW THE STONY TO REMOVE:
TO' APPLY AND WITNESS WITH THE BLOOD,
AND WASH, AND SEAL THE SONS OF GOD.

Verse three from the hymn by Charles Wesley, 'Sinners, Obey the Gospel Word'.  From 'Hymns and Sacred Poems' (1749). The plaque is attributed to Sheriff Hill.