I am indebted to Keith Bell for providing the following newspaper announcements.  They show that the early North Shields Pottery partnerships were in fact as follows:

The information is significant because it improves on the dates supplied by R C Bell in his book on Tyneside Pottery, 1971. It also shows that the C. C. & Co impressed mark was likely used until 1838.

The first announcement was put in the Newcastle Courant, August 23rd, 1828.  It shows that the firm operated as Cornfoot, Colville & Co from 1828. 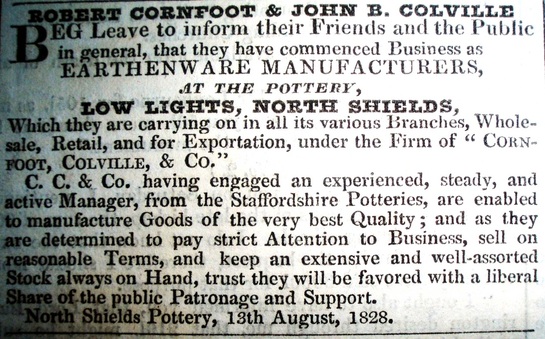 The second item, from the Newcastle Courant of May 28th,1831, announces the lease of the
pottery at the Low Lights is for sale. 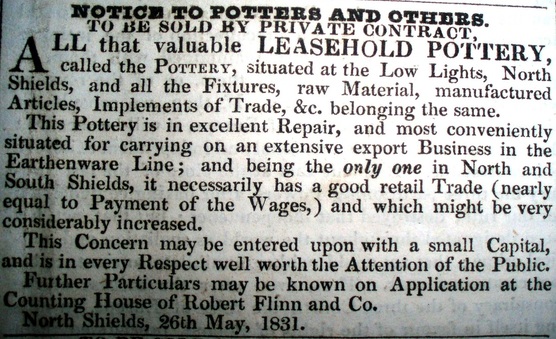 The announcement below was put in the Northumberland Advertiser on March 13th,
1832.  It shows that the firm would continue to operate as Cornfoot, Carr & Co. 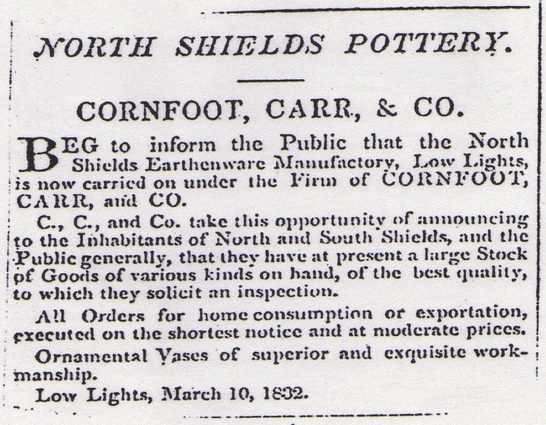 Published on February 24th, 1838, in the Newcastle Journal, a second announcement advises the public of the 'demise of Mr Cornfoot', and states that the firm will 'henceforth' trade as Carr and Patton. 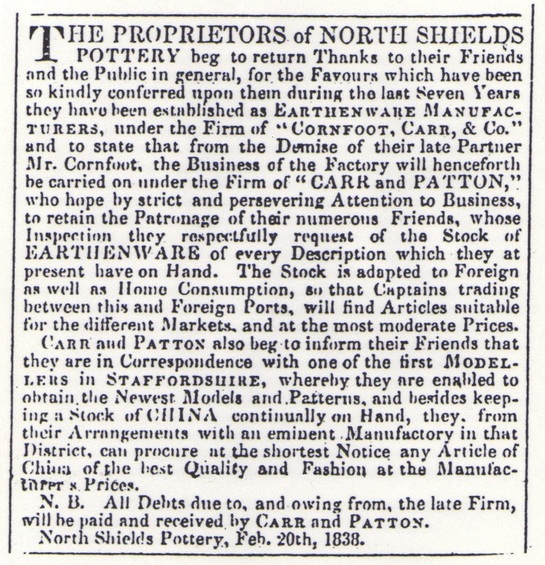 The advert below from Fordyce's Maritime Survey of the River Tyne, published in 1846, announces that Carr and Patton are now trading at the Phoenix Pottery, Ouseburn, as well as North Shields. 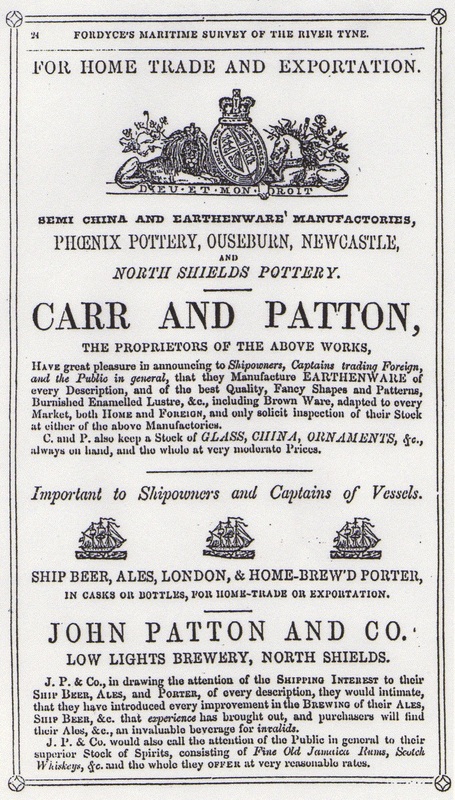 The following announcement is from the London Gazette, later in 1846. It shows that the Carr-Patton partnership at the Phoenix Pottery was short lived.

NOTICE is hereby given, that the Partnership existing

between John Carr, of North Shields, in the county

of Northumberland, Earthenware Manufacturer, and John

Patton, of the borough and county of Newcastle-upon-Tyne,

at North Shields aforesaid, and at the Phoenix Pottery,

Ousebum, in Newcastle-upon-Tyne aforesaid, has been this

Below are two details from jugs with Mariner's Compass transfers. They were made sometime after the partnership dissolved in December 1846, and show John Carr continuing at what would become the Low Lights Pottery, North Shields, and John Patton at the Phoenix Pottery, Newcastle.  Note that the JP transfer also shows a business interest in North Shields – presumably the Low Lights Brewery mentioned in the third press clipping above. 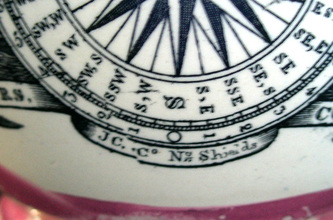 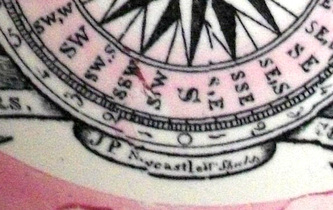 The next article, from the Shields Daily News, Saturday March 24th, 1894, shows that pottery making ceased at North Shields in 1893, and not 1900 as often quoted.

An old North Shields industry, if not the oldest survivor of the many flourishing mercantile and manufacturing enterprises of North Shields, has been discontinued, and the final scene will be enacted when the plant will be dispersed under the hammer on the 30th instant. This will be an end to the manufacture of pottery in North Shields. But we are glad to know that the stock of pottery has been taken over by Mr King, a servant of Messrs John Carr & Sons, who will continue, in large show and warerooms, in part of the pottery premises, the sale of ware goods of all descriptions. It is a reassuring fact that Messrs Carr are continuing, and are making extensive and costly preparations for carrying on the manufacture of glazed bricks and other similar goods of a high class, and for which they have established a well deserved reputation. We wish them every success in this useful departure of manufacture, which is becoming more and more recognised and necessary to efficiently carry out really practical sanitation. This is one amongst many signs of success in the borough. It is natural to deplore the extinction of old industries, but when they are replaced by more extensive productions to keep pace with the march of progress, there is nothing to regret. It is a fact that more wages are earned in the borough than in what are designated as its “Palmy Days”, men are better employed, better paid and better housed than in the old days. The Low Lights Pottery has existed since the early years of the present century, and not only did a large business, but produced a style of manufactures which were a credit to the town and were deported to all parts of the known world. Many men who were engaged within its walls afterwards attained a great success and affluence in several walks of life and looked back to theLow Lights Pottery as the first rung in the ladder of their ascent. About forty years ago there were not less than twenty potteries on the Tyne and Wear. Now there are not more than half a dozen. The wedge like plot of ground occupied by Messrs Carr has had many viscissitudes. There existed a glass works in the misty past – there the original gas works were planted. There Messrs Tyzack and partners had their chain works and test, afterwards occupied by a shipbuilding firm. We cannot leave this interesting item in the history of old Shields without referring to the head of the firm, the late Mr John Carr, who, in addition to carrying on successfully several businesses, reared many sons who became expert businessmen and he also did the State some service in public life. Moreover he was a genial and large-hearted citizen.
A notice was put in The London Gazette, JULY 18, 1893. p4067.

NOTICE is hereby given, that the Partnership heretofore
subsisting between us the undersigned,
John Carr, Robert Cornfoot Carr, Arnold Ormston Carr,
and Joseph James Carr, carrying on business as Potters,
Earthenware Manufacturers, Flint Grinders, Fire Brick,
Glazed Brick, and Terra- Cotta Manufacturers, and Manufacturers
of Fire Clay Goods, at the Low Lights, North
Shields, in the county of Northumberland, under the
style or firm of John Carr and Sons, has been dissolved,
by mutual consent, as and from the 24th day of
June last. All debts due to and owing by the said late
firm will be received and paid by the said Robert Cornfoot
Carr, who will, as and from the said 24th day of
June last, carry on the said business of a Flint Grinder
and Glazed Brick Manufacturer on his own-account,
under the style or firm of John Carr and Sons.—Dated
this 12th day of July, 1893.