Thank you to Fred Cooper for providing the press cuttings on this page.  You can visit his Seaham history site here.

Baker says that the Seaham Pottery was built in 1836 by Captain Plowright of Lynn. The Poll Book for Co Durham in August 1837 lists the original shareholders as follows.
Baker says that the pottery was taken over in 1838 by a group of workers from Dawson's Pottery.  They apparently operated under the name 'Messrs Ashforth, Hardie & Co' until the end of 1840, when the pottery was put up for sale. The following advert is from the Newcastle Courant, November 6th, 1840. 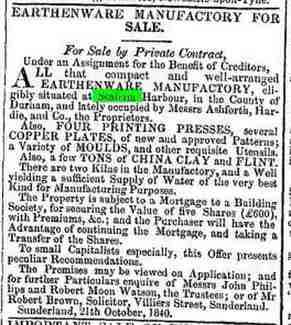 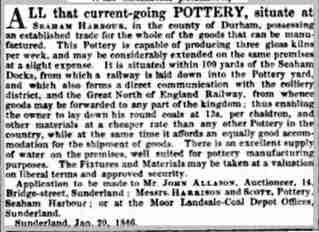 In March 1849, there's a notice in the Newcastle Guardian offering the premises to let 'immediately', and Walker appears to have moved to Carr's Hill Pottery, near Gateshead.  It is unclear whether the pottery was successfully let. 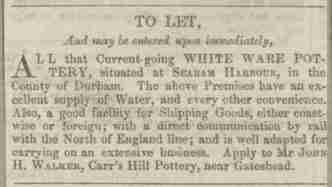 Walker sold the premises at an auction on December 11th, 1850.  The notice below is taken from the Newcastle Journal, November 23rd, 1850. 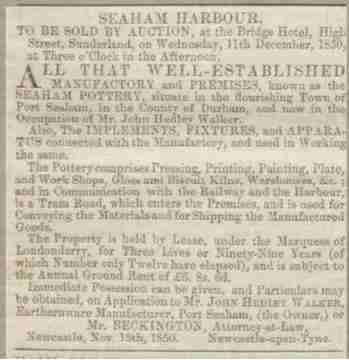 The property was bought by R.C. Wilson in 1850, but his ownership was short lived. An advert in the Newcastle Courant, September 10th, 1852, describes R.C. Wilson as 'a bankrupt', and offers the pottery's effects, including copper plates, for sale without reserve.  (It is not yet known whether R.C. Wilson was any relation to Joseph Wilson, one of the original shareholders of the pottery.) 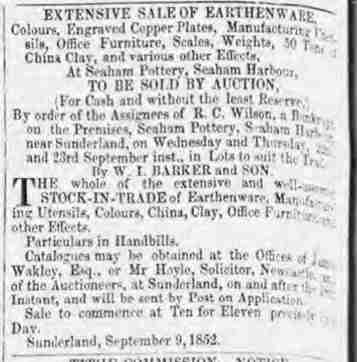 The pottery in 1854 when a fire entirely consumed the premises.  This cutting from the Newcastle Guardian, April 1st, 1854.