The first plaque below is 164 mm in diameter, finely potted, and has the impressed mark 'WALLACE & Co' (shown beside it).  Note the crossed leaf stalks at the bottom of the transfer, where usually there are flowers. It is decorated with a cobalt blue border – I know of very few others. The second plaque is unmarked, but comes from the same transfer plate (read more here).   The transfer has been cropped  and combined with a floral border. 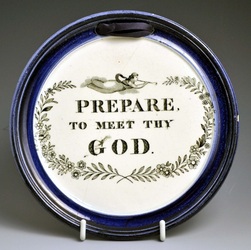 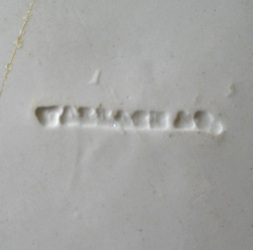 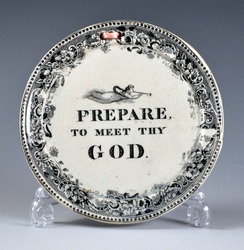 ​The plaques below are unmarked, and have a very similar transfer to those above, again with crossed leaf stalks. The flowers either side of the leaves are different to those on the first plaque above.  The bottom left plaque is larger: 185mm diameter, and printed in blue. The last plaque, again unmarked, is 170mm diameter, and combines a cropped version of the central transfer with a floral printed border. 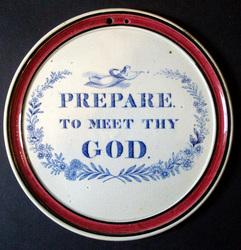 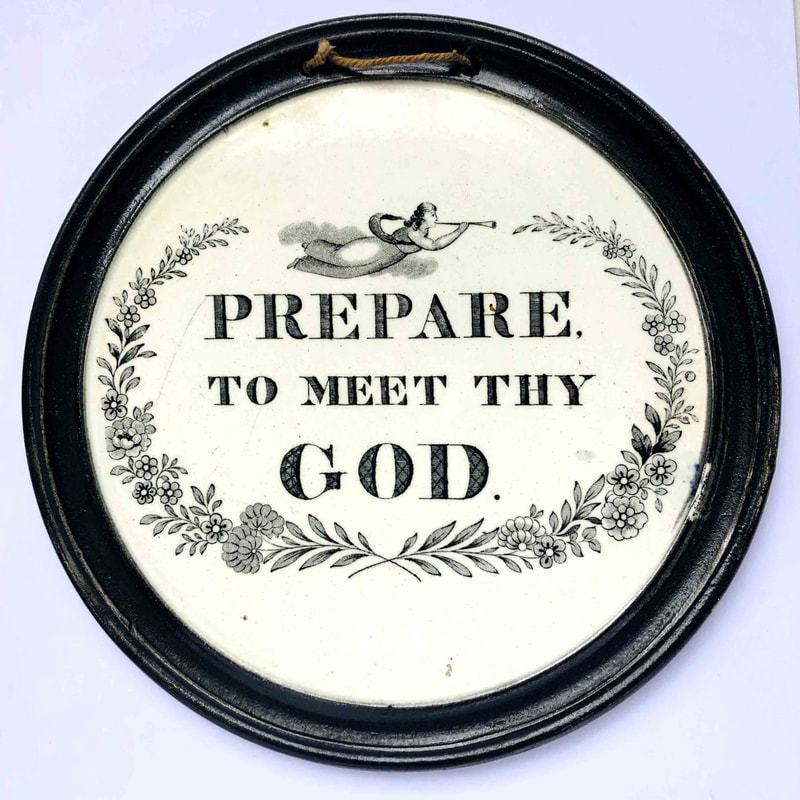 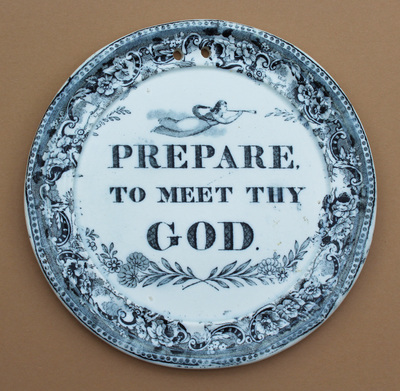 R C Bell (Tyneside Pottery, 1971) writes that the pottery in Forth Banks, Newcastle, was managed by Redhead, Wilson & Co before 1838.  He says that James Wallace & Co operated at Forth Banks between 1838 and 1858, and that in 1858 the pottery became simply Wallace & Co. Bell gets his data from business directory entries. However, these plaques, and those below, almost certainly predate 1858.  Even the date of 1838, when James Wallace took over the pottery seems quite late for those above.  N.B. C.C. & Co were producing similar plaques c1830. 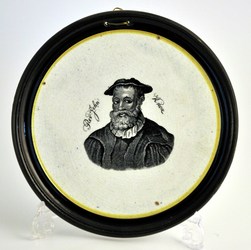 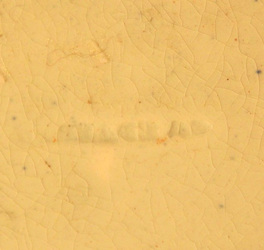 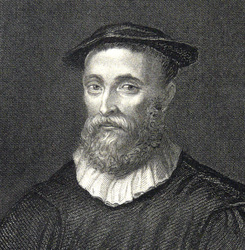 This rare plaque has an indistinct Wallace & Co impressed mark (the 'WA' is missing).  Right is a detail of an engraving by H T Ryall after a half-length portrait in Holyrood Palace.  John Knox was a protestant clergyman who brought about the reformation of the Church of Scotland.  Read more below. 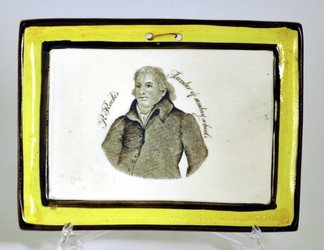 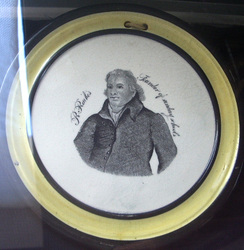 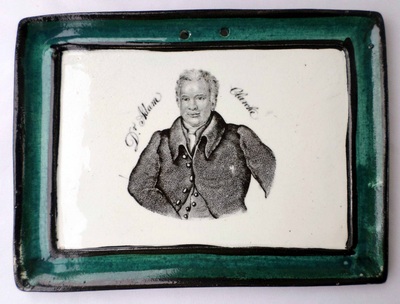 More plaques of preachers with joined-up script.  None of these plaques is marked.  They are attributed to Wallace & Co on the basis that they belong to the same series of transfers as Knox above.  Click here to read more.  Left and centre: 'R Raikes', 'Founder of Sunday Schools'. Stephen Duckworth has suggested that these plaques might have been made in 1836 to commemorate the centenary of Raikes' birth.  Right: 'Dr Adam Clarcke' (sic).  Below centre, a plaque from the same series titled 'Revd John Wesley', and a loving cup with the Wesley and Clarke transfers. 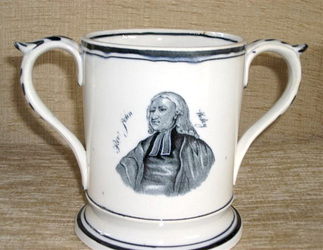 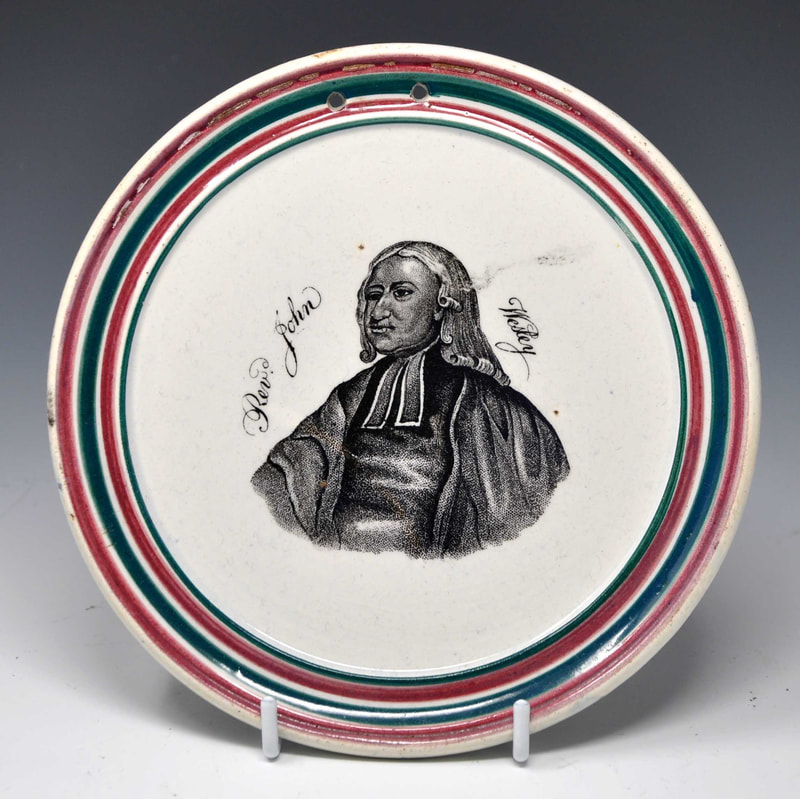 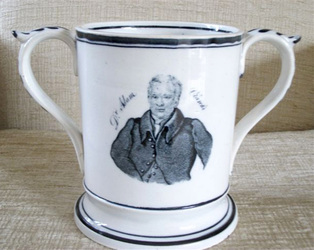 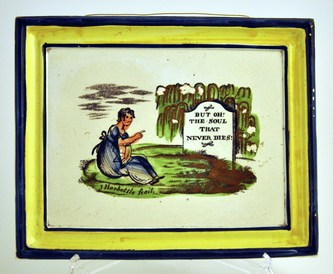 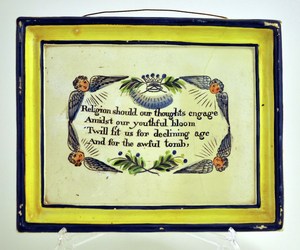 An unusual pair of plaques, which although unmarked, are similar in style to the plaques above. They also have cobalt blue in the borders. The illustration on the left, of a girl sitting beside a grave, is signed 'J Harbottle fecit', ie J Harbottle made it.
Back to top