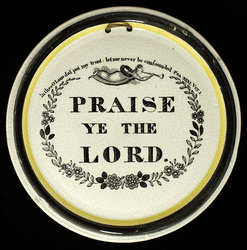 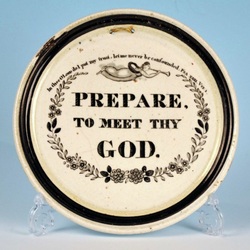 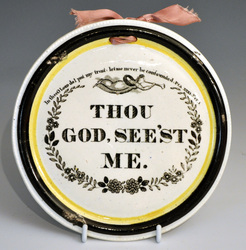 The 'Praise ye the lord' plaque, was presented to the V&A by a descendent of the owners of Newbottle High Pottery. The following extract is from the 'Newbottle Potteries' chapter in Baker (p44):

"The Victoria and Albert Museum have in their collections the following examples given by Mr W H Fairbairns in 1905: Vase, with lid, decorated with painted design of trees and cottages in pink lustre; circular plaque with religious motto, "Praise ye the Lord", and a broad band of copper lustre on rim; glazed, moulded earthenware figure of a goat; a bust of John Wesley; a child's plate with daisy pattern embossed rim and central transfer of a girl holding a bird; a set of three children's plates with embossed rims with mottoes, each with a differing transfer design and verse, and general title, 'Flowers That Never Fade'. The attribution of this wide range of pottery to Newbottle has been questioned, despite the fact the donor was a descendent of the owners of the 'High' Pottery and presumably had knowledge of its products. The children's pottery plates in particular would normally be regarded as Staffordshire products, yet a sherd of wasted plate uncovered from Newbottle in 1980 showing a fragment of 'Flowers that Never Fade is evidence that such pottery was, in fact, made in Newbottle and probably at other Wearside potteries."

It seems that Baker made an error in describing the border of the plaque as having a 'broad band of copper lustre'.  Click here to see the items that come up if you search the V&A catalogue for Newbottle.  You'll note they are all gifts of W H Fairbairns.

Anthony Scott managed the 'High' Newbottle Pottery until 1788, when he and his father set up their pottery in Southwick. After that Robert Fairbairns took over the management of the 'High' Pottery, and continued until John Broddick acquired it sometime between 1841 and 1851 (Baker). 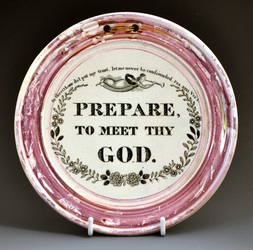 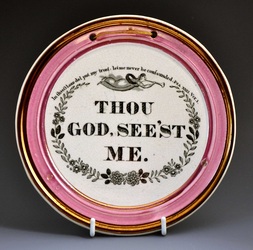 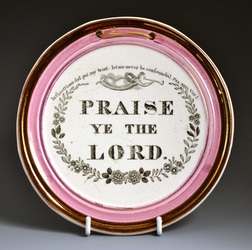 The above plaques have a chamfered back, very like items from Scott's pottery.  Their transfers come from the same transfer plates as the black and yellow plaques above.
Back to top