Left photo: Mostly early plaques, which are smaller in size, and are listed by pottery on the 'early plaques' pages, and by transfer on the 'religious' pages. The three slightly larger plaques (the first and second in the front row, and the centre plaque in the second row) date from c1845. Right photo: By 1850, the fashion was for bigger rectangular plaques. These plaques, which make up the bulk of the 'religious' pages, were produced in much larger quantities, and there are many subtle variations of the verse transfers. 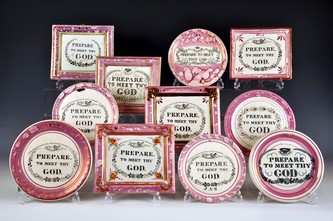 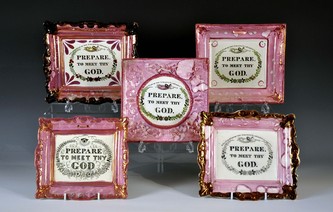 As with the 'Prepare' plaques, the earlier 'Thou god' plaques tend to be smaller in size (see below left photo). These are listed by pottery on the 'early plaques' pages. The larger rectangular plaques from the 1850s and 60s (see below right) make up the bulk of the 'religious' pages. 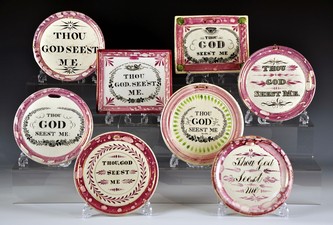 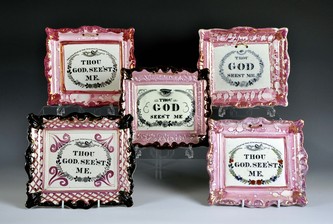 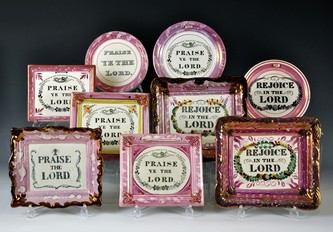 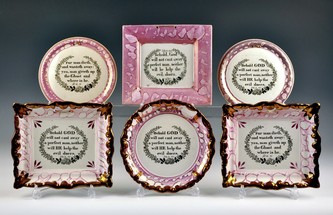 Wesley and Clarke, and plaques attributed to John Carr, Newcastle 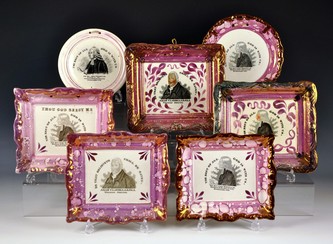 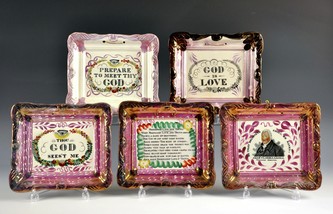 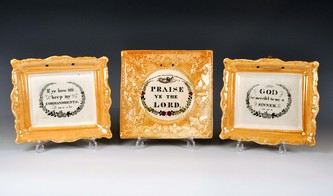 Baker attributes similar orange plaque to those on the right and left to Ball's Deptford Pottery, c1870. The centre, square, plaque is attributed to Scott of Southwick. Orange lustre was used between the period 1860–1890, and the quality is often poor, with rubbed lustre.  Rubbing, poor potting, and a later production date, make orange plaques less attractive to collectors.
Back to top