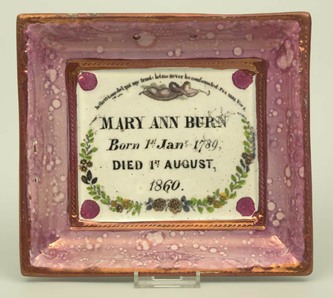 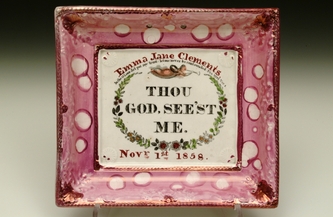 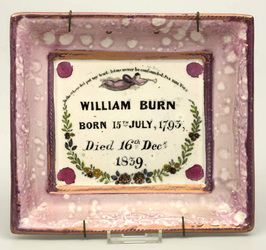 Plaques with hand-painted birth dates, deaths and other anniversaries are very attractive to collectors.  The three plaques above, attributed to Scott's, from the Sunderland Museum & Winter Gardens, Tyne & Wear Archives & Museums collection, help us to date this particular form as circa 1860.  A word of caution though, birthdates might pre-date a plaque and sometimes by many years, eg if the plaque was presented as a 50th birthday present.  Dates of death are perhaps more helpful in terms of dating, although the third plaque was likely commissioned 20 years after William Burn died. 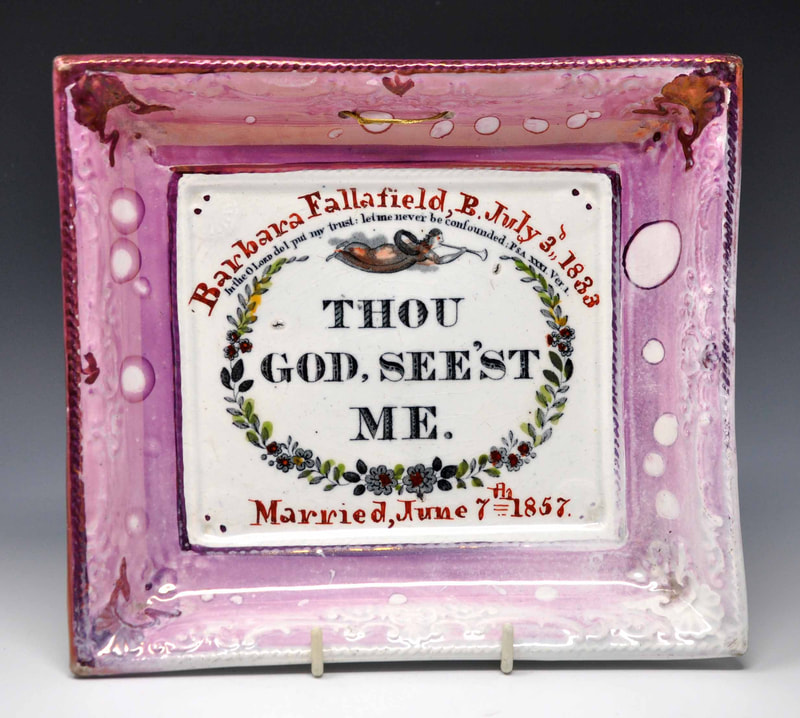 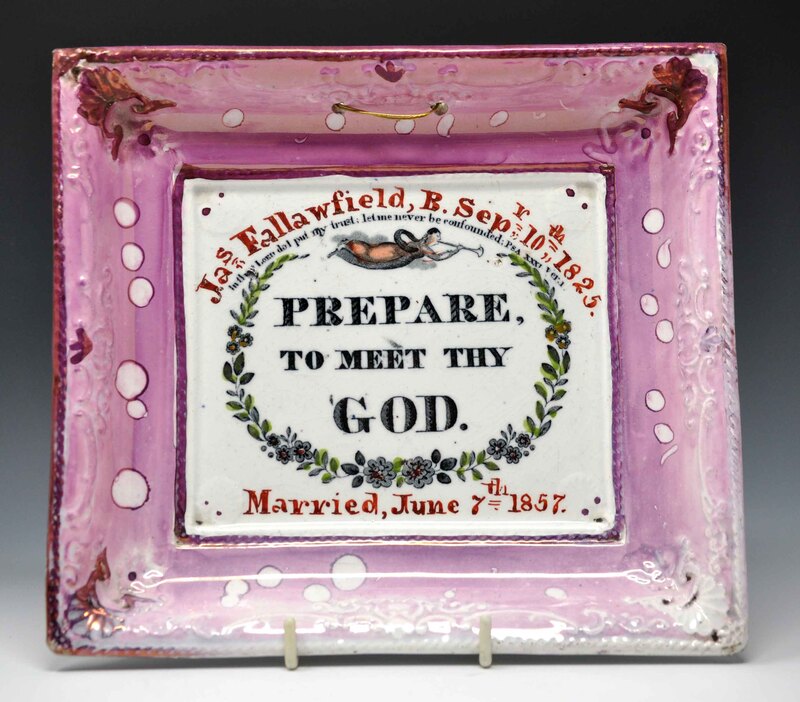 Marriage plaques, like those above, were most often commissioned at the date of the event, and are therefore more useful in terms of dating.

Census records show James and Barbara Fallowfield as farmers residing in Lunds, High Abbotside in 1871.  So just west of Hawes in North Yorkshire. They had at least 6 surviving children since their marriage 14 years before. 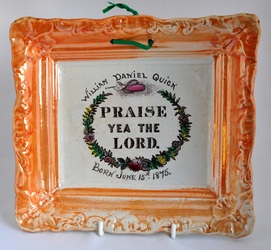 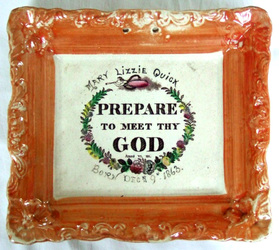 The two plaques above now reside on different continents.  Perhaps there is a third 'Quick' sibling's name somewhere on a 'Thou God...' plaque.  It seems likely that these were both commissioned in 1875 (the date of birth of the younger child).  Thanks to Dr S Nield for providing the following information:

On your site, you have pictures of a pair of plaques which have birthdates and names specially inscribed on them: Mary Lizzie Quick and William Daniel Quick, and you mention that there might be a third [plaque with another sibling] out there somewhere. Actually, there could be two more: one for their sister Henrietta (born 1882/3) and one for their brother George (born 1879/80). I looked them up in the census records: they were the children of Cornish fisherman William D. Quick and his wife Mary Noall, both born in 1840 or so, and they all lived in St Ives. (Mary Lizzie from the plaque married a man called John Thomas in 1888).

Interestingly, there is no Sunderland link.  So perhaps these inscriptions were commissioned through a local distributor, or a sailor carried the instructions to earn some money on the side.
Back to top 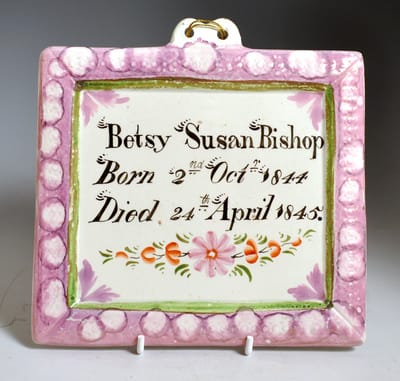 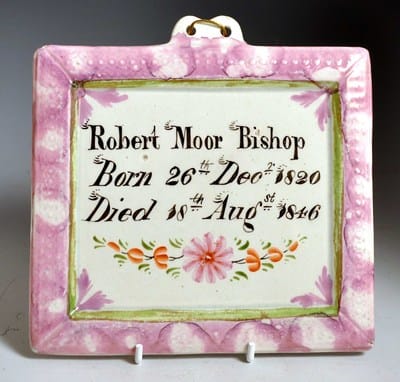 Two pretty Sherrif Hill attributed plaques commerorating the death of a 6-month old baby, Betsy, and perhaps her 25 year old father, Robert, just over a year later. Touching reminders of how hard life could be in the 19th century. 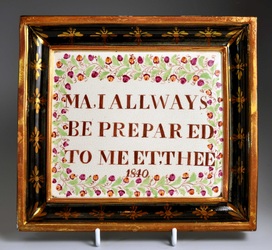 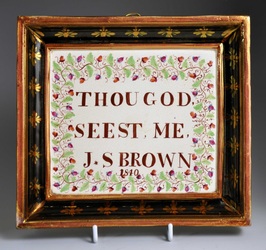 Above are two superb hand-painted plaques with copper and black borders.  Inner border of acorns and leaves.  Dated 1840.

The plaques below have distinctive leaf and flower borders. The first plaque is attributed to Moore's from the 1860s. The second plaque is in fact a fragment with three of its edges trimmed off, and also likely Moore's. The text, leaves and flowers on the third plaque are unlike any I've seen before, but the lustre decoration again has similarities with Moore's plaques. 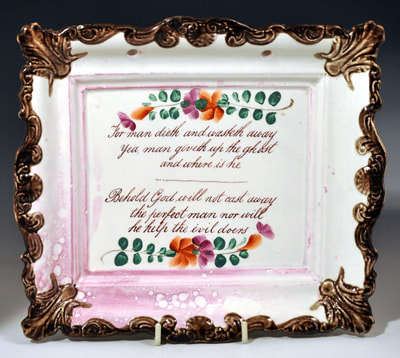 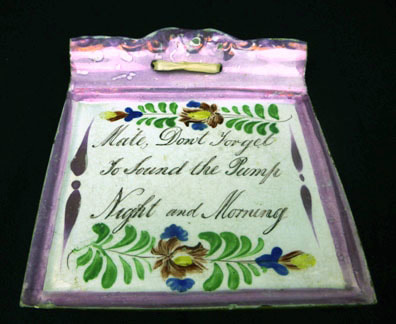 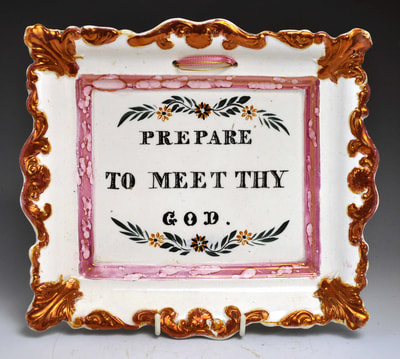 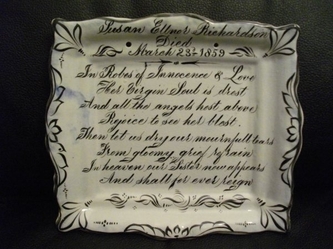 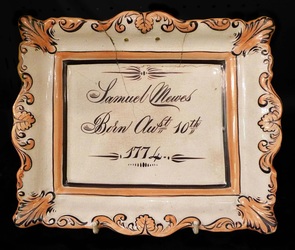 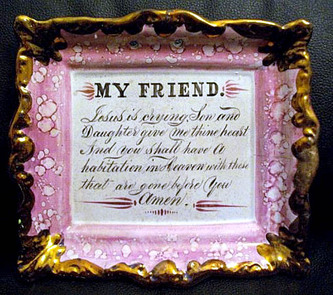 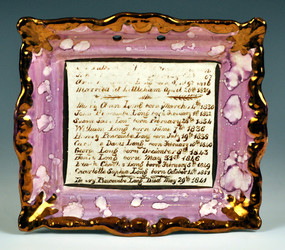 I am indebted to Norman Lowe for finding the following information about the Long family in the 1851 census:
Family living at 48, Albion Street, Withy Combe Rawleigh, Exmouth, Devon

So it looks as if John and Anne were married at Littleham in 1829, when he was 21 and she was 18. They had their first child, Mary, a year later. By 1851, just before when the plaque was made, there were 10 of them living at the same address. Their third child, Henry Puncombe Long, died in 1841, not yet 3 years old. But a new child, Charlotte, was born shortly after the census, bringing the household total to 11. John Long was a mason employing one man.  His boys are also listed as masons, working from as young as 14. The girls worked as lace makers. The younger children are charmingly listed as scholars. John perhaps commissioned the plaque, satisfied that his procreative duty was done and there would be no more children. His 40 year old wife, Anne, after giving birth to 10 children, was probably mightily relieved!  Read more by clicking here.
Back to top 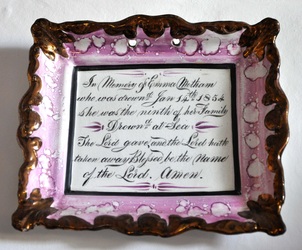 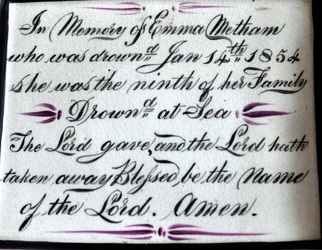 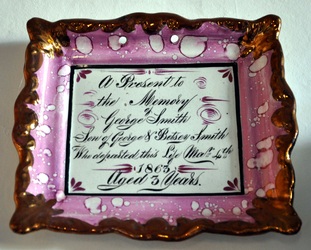 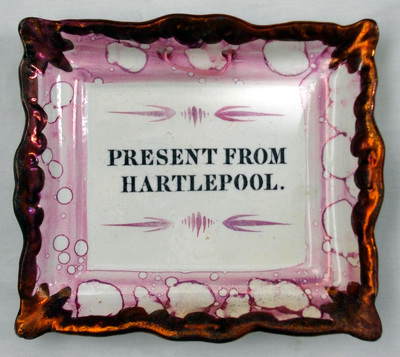 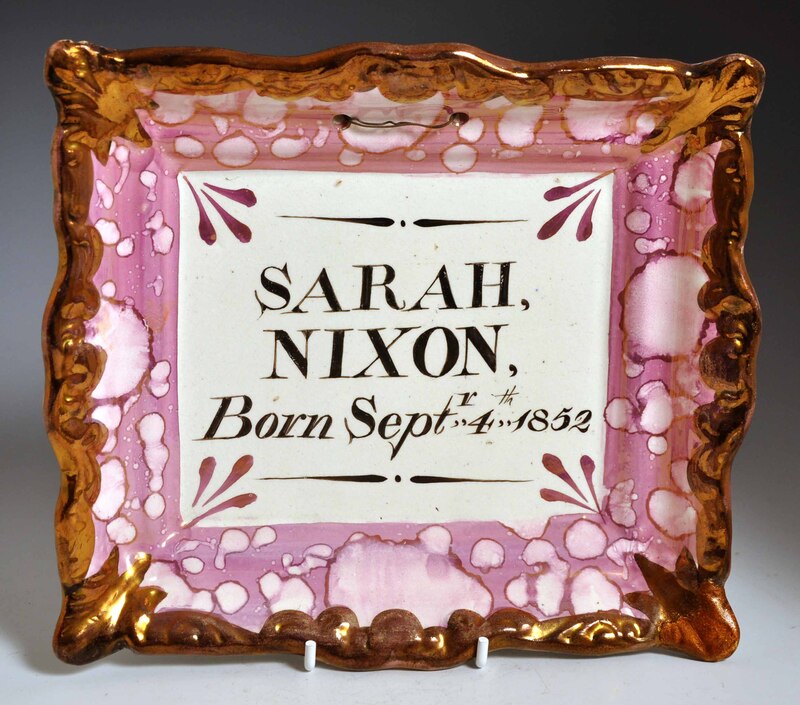 Although the left plaque has the transfer 'PRESENT FROM HARTLEPOOL.', it has similar hand-painted lustre embellishments to those above.  Both the above plaques have a beautiful simplicity.  The text on the right plaque reads, 'SARAH, NIXON, Born Septr 4th 1852'.
Back to top 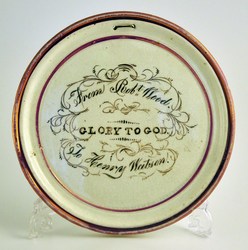 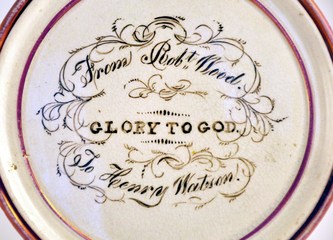 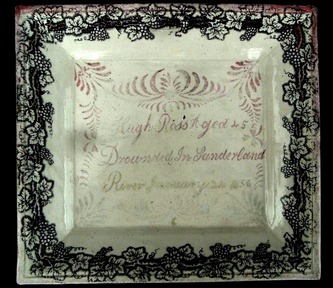 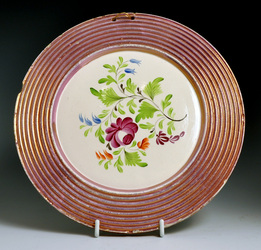 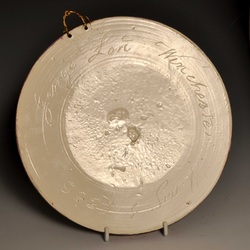 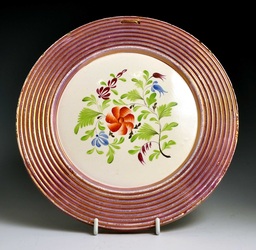 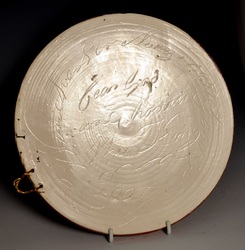